The South Milwaukee Fire Department was organized in 1893. On June 8, 1893, the first organizational meeting for the department was held. At that meeting, the trustees decided to erect a building that was suitable for housing the village's fire apparatus that had been ordered. Village President, Fred Mansfield, donated a lot on 11th Avenue, near Madison Avenue The trustees then voted to authorize the building of a temporary fire station not to exceed $100. In December of 1893, the Fire Department moved from its temporary quarters to the newly built City Hall on 10th Avenue At this new location the fire department occupied the first floor with a stable at the rear of the property for the department's horses.

The South Milwaukee Fire Department started the switch from horse drawn engines to gasoline motor powered apparatus in 1921. The first piece of motorized apparatus was a truck that the city purchased and was then outfitted by the firefighters to be used as an engine. The chemical tanks from a horse drawn unit were mounted on the truck along with a hose box. A new set of ladders were purchased for the truck and ladder racks were made and attached to the truck. The motor driven engines and ladder truck provided a great improvement to the firefighting capabilities of the department, although at the time a motorized engine responding to the fire was not as exciting to watch as a horse drawn engine racing down the street. 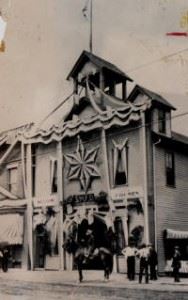 Over the next few years the Department completely switched over from horse drawn apparatus to all gasoline motor powered engines and a ladder truck.

The first fire apparatus was actually ordered before the South Milwaukee fire Department was officially organized. After a fire on March 2, 1893, that destroyed the Lakeview Club Houses on Milwaukee Avenue, the growing City of South Milwaukee called for action to be taken to provide fire protection for its residents. On March 4, 1893, a temporary Board of Trustees met to address these issues and on March 21, 1893, authorized the City Clerk to advertise for bids for a "double cylinder champion chemical engine." As the City grew, additional horse drawn engines were purchased along with a horse drawn hook and ladder unit. These horse drawn engines and hook and ladder wagons were used until the early nineteen twenties when they were eventually phased out by gas powered engines.