The water that you use to take a shower, do your laundry, or flush your toilet, must be cleaned up before it goes back into Lake Michigan. In South Milwaukee, the wastewater is conveyed from the users to the treatment facility in the sanitary sewer collection system. The collection system in a series of about 65 miles of pipe and five lift stations. The sewer pipes range in size from 8 to 36 inches and are made of materials such as plastic, clay, concrete, cast iron, and brick, in some of our older areas. The pipes carry the flow by gravity to the low point in the neighborhood and discharge into one of the lift stations. The lift stations pump the wastewater up to a higher point so it can continue to flow to the treatment facility.

The wastewater goes through 6 processes at the treatment facility; fine screening, grit removal, primary settling, secondary biological treatment, final clarification, and disinfection. The screenings and grit are collected and sent to a landfill site. The sludge generated during the primary settling and secondary biological treatment is pumped to an anaerobic digester where it is processed to remove volatile components. It is then thickened and stored until it can be trucked out and applied to farm fields in the area. The last step the wastewater goes through is ultra-violet disinfection, which destroys most of the pathogenic bacteria that remain. The clean water is discharged into Lake Michigan. The facility also has a laboratory that runs daily tests on the wastewater to monitor the processes and report results to the Wisconsin Department of Natural Resources. 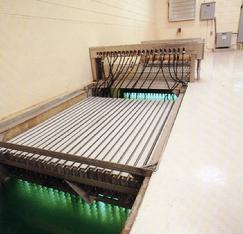 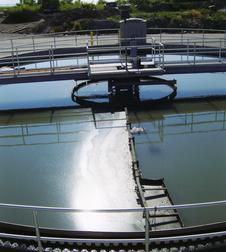 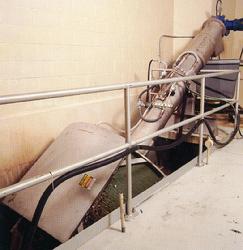 The earliest wastewater treatment facility in the City of South Milwaukee was located on Hawthorne Avenue, close to Lake Michigan. By-products of the settling process were treated in drying beds near Third and Marquette Avenues.

In 1936, a primary treatment facility was constructed at the present site. In 1970, a secondary treatment facility was constructed at this site. In 1985, a new aeration system was installed and a process was added to dewater digested sludge.  A 2.8 million gallon sludge storage dome and an ultra-violet disinfection system were added in 1996.  In 2000, new primary clarifiers, a fine screen machine and a grit removal system were added to the facility. Currently, in 2008, raw influent pumps and a waste gas burner are under construction.

Prior to this, the city embarked on a program of rehabilitation and independence, thereby separating the City of South Milwaukee from the Milwaukee Metropolitan Sewerage District. South Milwaukee had a combined sewer system, where the flows from both sanitary and storm sewers flowed to the treatment facility. Early developers of the city foresaw the potential problems with this, and separated the systems back in 1910.

The position had previously been recognized under the duties of the Street Superintendent until the position was created in the 1950s.